Skip to content
I was so happy when the doorbell rang this morning because my Sophie Theallet for Nine West flats finally arrived!!  In case you don’t know French designer Sophie Theallet has cleverly teamed up with Nine West for a spring/summer 2011 collection.  Ms. Theallet has many achievements under her belt including work with Vivienne Westwood and Jean Paul Gaultier.
Her collection with Nine West is interesting because she reprises the same pattern in every different style shoe yet they all have their own individual feeling and distinguished look.  There are only two colors to chose from, pink or chocolate — I chose pink, naturally, but the chocolate is cute too!! The inspriation of the collection is Theallet taking a trip from Paris to NYC and the pattern reflects the vibe of both cities.
This line has gotten so much press it’s crazy!  All major fashion outlets have reported on it making the launch this month extremely successful. I knew I wanted a pair of shoes but I didn’t know which one (there are 3).  I opted with the flats for comfort, and I know I would wear them the most. The shoes and two bags are pretty much the same price $80-$100 but I think it’s well worth it for a capsule collection!
Anyway as I was saying…I ordered the Pila flats in pink!  I LOVE them!! They fit perfectly (true to size) and have a good cushion which is always important when wearing flats.  Because they’re pink and have a bow I was thinking they may be too ‘loud‘ but they actually match my outfit today perfectly and are in no way too over the top looking! 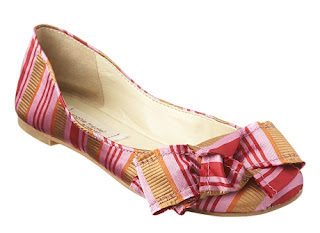 I think that Sophie Theallet collaborating with Nine West was a great move for the company.  Sometimes I think Nine West isn’t for people my age — some of their styles can be kinda dry and boring.  BUT, they def changed the game with this capsule line (even their regular summer collection is good this year) and hopefully they’ll continue to do more to appeal to a younger crowd!
Almost forgot to mention, I’m a Nine Loves Rewards member and I had a $10 coupon which I put to good use on this purchase!! If you ever shop at Nine West I highly suggest signing up for this free program.  You get points per dollar spent (on special days triple points) and for every 150 points earned you get a $10 reward to use on anything (including sale and clearance)!! You’ll also get special promo codes and secret sale information throughout the year, and a birthday coupon!