Skip to content
The colder weather signifies two major culinary moments for me, high volume slow cooker usage…and soup.  This weekend, before I settled down with an apple cider mimosa for Sunday Football I prepped for what turned out to be an incredible beef stew.  My Mom has always made beef stew come the winter months, and I was craving it so badly I just felt like making it on a mediocre chilly day…but, I’m so glad I did. 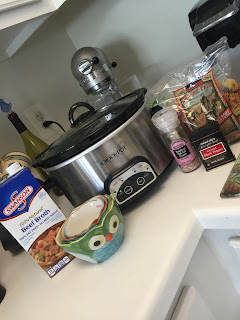 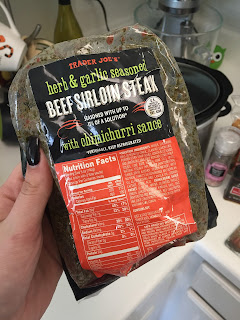 I started out by browning a Trader Joe’s Herb & Garlic Sirloin Steak.  It comes with a package of Chimichurri sauce, but I’ll use this another time. 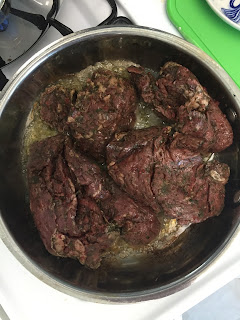 Once browned in olive oil for about 3-4 minutes on each side, I cut up the meat into smaller pieces and transferred it to my slow cooker.

I poured 2 cups of Swanson Beef Broth over it, and seasoned with a light amount of salt, and a fair amount of fresh ground pepper.  I threw in 2 bay leaves, and put the lid on, setting the slow cooker on low for 10 hours. 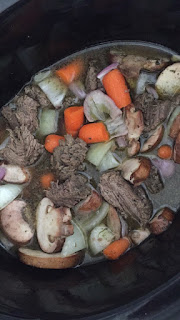 At about hour 8 I thew in an sliced up Spanish onion, and a bunch of baby carrots and mushrooms.  I didn’t put them in to start because I cannot stand oversaturated/ soggy veggies.  You can add as many veggies as you want, since I added a lot I made sure to also add about a half cup more of beed broth.
Once the slow cooker turned to warm I tested out a piece of the sirloin and oh mah gawd, it shred beautifully and was still the slightest pink in the center.  Amazing.  I made a small batch of pasta, and poured the stew on top, and had a super delish November dinner.

This was so easy to throw in the slow cooker- prep time was 10 minutes max.

I even let Leo have a piece of meat, which he was so ever grateful for!  This is him over my shoulder trying to get more…newsflash, it didn’t happen. 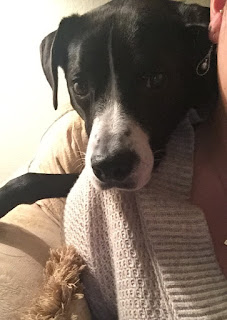