Skip to content
Two weeks ago it was a tad on the cooler side, and then it went back to being kinda warm…lame…and then this morning I was frozen when I woke up.  ANYWAY, in an effort to welcome in the fall season I decided to make some homemade clam chowder!!  I based it loosely on Ina Garten’s (the Barefoot Contessa) East Hampton Clam Chowder, found here, but I def added some of personalization and changed it up a bit! 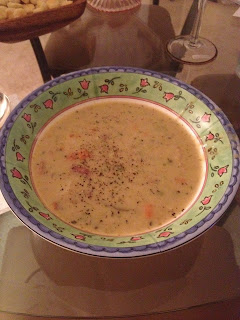 It was seriously delicious, and I can’t wait to make more soups and chowders this season!  Now, as usual I don’t necessarily measure each ingredient when I cook, especially when using spices and such.  I approx’ed the amount I used for each ingredient, but really just use your best judgement and taste test often!
Ingredients
-12 tablespoons of unsalted butter
PS: you won’t be using all 12 at once, just an FYI
-Celery, carrots, and a yellow onion
You as much of these veggies as you want
-Red potatoes
I used 3 and cubed them first, you don’t want to use too many potatoes and you also don’t want them to be overly large pieces

–Bacon
As much as you want really, I used 6 strips
-1/2 cup of flour
You may need to use a tad more towards the end if you find the soup isn’t thick enough
-4 cups of clam juice
Most supermarkets sell the same size bottles, so 4 bottles
-4 cups of clams
This equates to 4 of the canned clams
-1 pint of heavy cream
Or you can use milk
-Chicken broth
I would say  I used about a cup and a half
-Salt and pepper

-Herb provence
In the spice aisle
-Mrs. Dash’s ‘Garlic and Herb’ seasoning
Directions
-Melt 4 tablespoons of butter in a large/ deep pot and sauté the onions first…after about 7mins throw in the celery, carrots, and bacon — season with salt, pepper, and some Mrs. Dash’s seasoning

-After about 10mins add in the potatoes, remaining 8 tablespoons of butter, and whisk in the flour — be careful here, you’ll need to whisk fast and get the veggies coated quickly because you don’t want the flour sticking onto the bottom of the pot

-Once the veggies are flour coated and the butter is melted add in all of the clam juice.  Let it come to a boil and leave it for about 15mins

-Add in the chicken broth, heavy cream (or milk), bay leaves, herb provence (as much or as little as you’d like, start off with a little and build it up) — leave for about another 10mins

-I added the clams last and let them cook in the chowder for about 5mins — taste test, if you need more flavor use the Mrs. Dash seasoning — try not to use too much salt!

-If you feel it’s not as thick as it should be, whisk in flour sparingly — but make sure you’re really whisking it in, rather than just stirring

This recipe took me about an hour to cook up, it was super easy and super yum.  Perfect for a cool rainy day or snow day in the future!

I served this with simple oyster crackers and nothing else, it’s a pretty hearty meal so I didn’t think I needed much else to serve with it!  Oh, and the leftovers were even better the next day!

PS: This recipe makes a huge batch, I ate leftovers of it like all week — just an FYI.